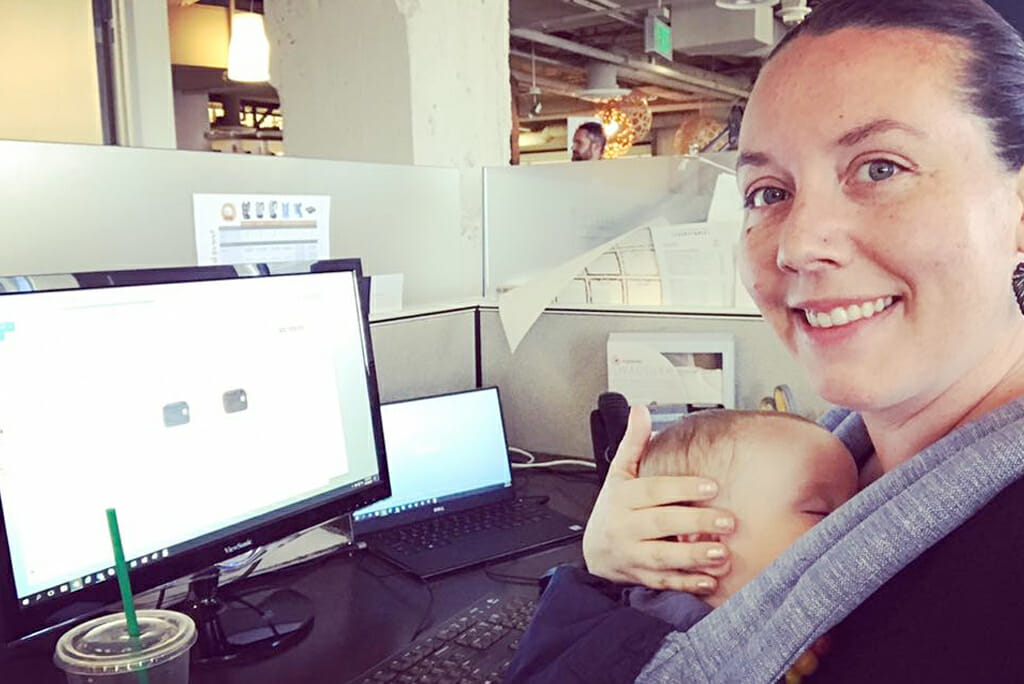 In honour of World Autism Awareness Week (1-7 April), we’re sharing Laura’s story of how a baby carrier became a useful tool for her beautifully unique son.

“Early on I knew something was unique about my son. Everything about him just seemed more intense than other babies his age. He cried a lot, seemed behind on his developmental milestones, everything about him was just “more” summarizes how I felt at the time, and babywearing kept us all together. Looking back now I realize that I was indeed suffering from postpartum depression and some PTSD, and carrying for a high needs infant seemed to exacerbate or increase the symptoms. Breastfeeding didn’t go well, I received some really terrible advice, and pumping seemed like a special kind of torture. So we didn’t, and then came on more guilt. Not the ideal birth, not breastfeeding? What kind of Mom was I? This is where the carrier came in.

It got us outside the house, this was where Chandler was most happy, and cried the least. It took me awhile to get the confidence to get out, but once I did I realized how much happier we both were. We started with walks in the neighborhood. I tried a stroller and he cried nonstop, so back into the carrier he went. It was a place of comfort and safety. And I realize now it probably gave him the input and pressure he needed to better regulate his body systems. The movement was critical in helping him to organize as well. Even now, as a happy 9-year-old, he needs a lot of movement in his day to be able to settle down and allow for learning, for eating and sleep and an overall sense of balance and contentment.

I brought up to his pediatrician around 18 months that I thought some of his behaviors were concerning. She dismissed me, said he was a boy, “they’re just more intense” she said. I called Regional Center, our local resource center for developmental support a few months later and asked for an evaluation. They said he was just delayed in speech, but again, deep down, I knew there was more. My husband was always supportive, but he wasn’t seeing what I was, but so much of that was because I was with him all day long.

Since he was now mobile, the carrier turned into something else. It was immensely important in our day to day routine, but that’s because I needed it for his safety. He pulled away from me, even dislocate his arm to run away, and after a few close calls of him trying to run into traffic, a carrier was our saving grace. It kept him in arms reach, and kept my arms free to do what I needed to get done and transport him from place to place.

At two years old I had had enough. I lost it and sobbed my eyes out on the phone to his Regional Care coordinator. They ordered a developmental evaluation by their Pediatric Psychiatrist while we waited to see a Developmental Pediatrician, and at this point I was eagerly awaiting a diagnosis, something, anything to give us some help for him. On the day of his appointment, I was hoping, praying, they would see what I saw. That they wouldn’t just dismiss me and once again have another professional make me feel like I was not telling the truth or imagining things. “I am confident he has Autism” she said. And while that would break the heart of many, I felt elated, elated that someone validated what I had always suspected and we could finally move forward and create a plan of action. I popped him back in the carrier to walk to our car. I cried on that walk, but he was smiling and happy looking around, his safe space.

Once we got the ball rolling with therapy, I was thrilled to find out our Pediatric Occupational Therapy team was supportive of us continuing to wear him in a carrier. He had some low tone (hypotonic) in his core, and keeping him supported from knee to knee in a good squat position facing us on our fronts or backs, was something she supported completely so he could counter our movements and build those core muscles. We worked with her to make sure the carrier and positioning was both correct, and meeting his needs.

Our Speech therapist was also supportive of continuing to wear him in a carrier. It allowed me to narrate my day, hold conversations with him and keep up American Sign Language, which I credit for helping to keep his frustration levels down as he slowly gained expressive language. He was able to see and participate in all of our day to day activities, feel included and work on reading social cues.

Eventually he outgrew being worn in the carrier, however I am eternally grateful that we had that tool during one of the most difficult times of our life. As our daughter came along two years later, and was also diagnosed with Autism, we were better prepared to handle each step of the way because we had a tool as simple as a baby carrier. For some the use of a carrier is emotional, for others it’s a tool. As a babywearing educator and now Mother of four, I believe it’s a beautiful and often complex mix of both. While my own experience is uniquely my own, I absolutely believe a baby carrier can have a therapeutic effect, and my hope one day is for more research, which could hopefully lead to insurance coverage and carrying beyond infancy to be an option to support families through a variety of special circumstances and needs, tailored to their bodies and their situation.”

iF Design Award: A great evening for small Metro